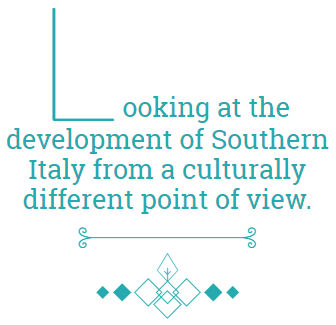 The problems of Southern Italy (the so called “Mezzogiorno”) are old, but, nevertheless, always new. Are we sure that conventional ideas about the Mezzogiorno are still valid – after so many years of policy failures? The gap between Northern and Southern Italy has increased, rather than reduced. Is this gap only a matter of income, or is it more of a social issue, a matter of quality of the civil society? We cannot imagine to attract new funding if the territories do not provide the essential services to the people, if there are no investments on education and culture, if we do not foster civic-mindedness, if we do not aim for social cohesion.

The development of the Mezzogiorno is an ancient topic, yet it remains open even if in recent years it has appeared feeble, barely marginal if compared to social and political debates.The problem has always been assessed in terms of financial gap between North and South, so basically in terms of GDP. Considering the outcomes of this approach, though, we should be questioning the real nature of this gap. We must wonder if it is mainly financial, income-based, or maybe if it is rather affected by the degree of social cohesion, of sense of community, of distribution of legal knowledge and, more specifically, of civil coexistence.It is clear that the strong differences in terms of available wealth are an adamant point of differentiation between the living standards, and it is right to say that Italy, no matter the circumstances, has a joint liability towards its Mezzogiorno. But one must first analyze the effectiveness of this approach: is it the right one? Is it feasible? Culturally successful and politically productive?I personally believe not. I think that by now no realistic outlook of development will be possible if we don’t start from the belief that Southern Italy’s true priority is social cohesion. The Mezzogiorno issue has become, or has always been, a social issue: regarding new destitutions, different needs, fragmentations of the social canvas.

Does it therefore make sense to imagine policies that will lure investments in territories with poor cultural administration and strongly broken up communities? Does it make sense to “spin some money around by promoting subsidies and benefits, without any selection or serious follow up of the results, with administrations and institutions that are unable to spend money, let alone in a good way? Is it right, when considering a policy of development, to actuate numerous income-supporting measures not trying to obtain a transparent assistance but rather through many unclear, client-based ways, that often cause further distortion in the labour market? Does it make sense to ignore that a substantial portion of the Southern GDP is made up of underground economy (not necessarily of a criminal nature) instead of trying out some sort of policy, if not cyclical and partially effective repressive measures?Even in this case, I believe it does not. First of all we must up-bring the belief that seriously taking care of the social world is a way to invest in the development of a territory. It is a crucial aspect of the development itself, not an annex of it. Usually no one is blatantly against or in opposition to social policies, but factually we can only see these taking place in situations of flourishing or growing economy. Instead, we witness disinvestments and cut-offs. But without a cohesive community we cannot have love for rules and therefore development.

The growing phenomenon of early school leaving, the inability to attract and keep “brains” within our regions, the abandonment and negligence towards public assets, the incapability of appraising our heritage are just a few examples of a short-sighted policy that, in addition to affecting the economy (just think about costs when dealing with emergencies or when trying to limit damages), deprive Italy and its South of an enormous development potential. An example above all is the management of child-related services, with a gap between North and South and the rest of Europe so big that having a policy even vaguely interested in Italy’s “future” should be a top priority. In the southern region of Calabria the coverage of nursery schools is just over 2%, whilst in the north-eastern Emilia Romagna the percentage of children taken care of by childcare services is 27.3. A huge waste of opportunities that affects many other regions of the South compared to Italy’s central and northern ones. Moreover, the European Council in Lisbon set as a 2010 objective the 33% coverage regarding nursery school services for each Member State. A citizenship discrepancy, we could say, that starts for the earliest of ages and that carries on, growing and intertwining with other difficulties, up until adulthood and beyond. What is therefore the point in tuning rich subsidies to land investors in territories from which even we would often want our children to flee?

From the end of World War II onwards the development imagined for Southern Italy has been, in fact, hetero-directed: little relevance to local thrusts, poor interest to emerging subject and a worrying inattention to quality. On the contrary, development is a slow process that should be built involving many parts that cannot be considered “beneficiaries” but protagonists.We have to start a cultural and political battle for Italy’s South that will, in first place, set the objective to go beyond the gap of GDP between North and South, and change the hierarchy of the interventions and priorities, in the certainty that social cohesion and the setting of a righteous communal logic are not consequences but indispensable preconditions for development.We must go back to doing Politics (with a capitol P), rewarding the exercise of responsibilities rather than the declarations of loyalty, developing a permanent knowledge of the net, of comparison, of debate, of listening. In other words, we should go back to investing in the Establishment. In this challenge the Leaders of Society must play an important role because – a part from the occasional striking news – in it we find those capable of expressing a possible new reality, bringing together experience and good deeds that, in concrete, are pieces of true politics in the territories. And I am not talking about solidarity and inclusive aspects, that are nevertheless important, but also other network dynamics that can increase financial paths and the development of a communal welfare.If we keep in mind a model that does not chase unconvincing levels of richness to be obtained at any cost, but the organized and lasting development of our territories, we could build a better Mezzogiorno.