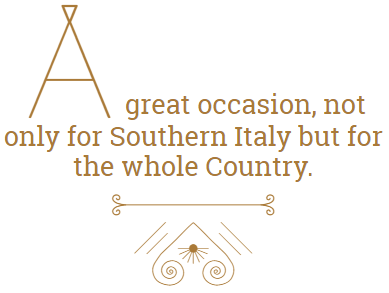 In the last months the “Southern issue” has been lit up again. Firstly, the data gathered by Svimez in the 7-year research from 2007 to 2014, according to which Italy’s Mezzogiorno has had a smaller financial growth than Greece, then Saviano’s article on the state of abandonment of the South, finally Italy’s weekly magazine “L’Espresso” that claims “The South has disappeared” “Demographic collapse. Brain drain. Static economy. Missing entrepreneurs”. The reason for these condemnations comes from the attempt of bringing Southern Italy’s critic situation back in the objectives of the Government’s actions, that – as said- will be dealing with them next October. The Minister of Economic Development has pre-announced the summoning of the Southern States-Generals.

THE “MEZZOGIORNO”IN THE FIRE OF ATTENTION

The need, felt by everyone, of placing once again the Mezzogiorno in the fire of National attention must be seen not as an unsolvable problem, but as a great occasion not only for the South but for the whole of the Country. For the energy and resources that can come of it, and for the margin of recovery and development that precise actions can bring, Southern Italy is an opportunity that will be able to favour financial and non-financial debts of the Country. Of course, as the SVIMEZ study reminds us, the task is not easy, but the results can be important. In the surely not brilliant general image of our Country, the numbers concerning the Mezzogiorno show it moving back more than the national average: from investments to employment, from capitalisation and size of companies to production capacities. It is important to consider that the pull of exportations that has been a big part of the however modest improvement of the economic Central-Northern conjunction, for structural reasons is not working for the South. The fear here is that these events will lead to a spiral that will bring to the so called desertification of the South, with sceneries going from economic depression to the drainage of youngsters who look for education and training before employment. This would be an enormous damage for the whole National Community. Italy’s South is traditionally complementary to the Northern economy, and the absence of internal demands that distresses the Northern economy would obviously benefit from a larger internal request, that has dropped especially in the South and that, when speaking about companies, would give an important push to the entire National economy. This is why Southern Italy must not be seen as a problem but as opportunity and efforts must be condensed in order to let the South, and with it the whole of Italy, outburst.

For this, an Industrial Policy that can give precise and trustworthy reference points is necessary. We must proceed with realism but also with strong determination. The task of this industrial policy has to be to show institutions and companies the priorities and the objectives to reach, in order to have joint and effective efforts. The resources, both public and private, are limited and therefore should be even more condensed on objectives that are considered essential. Obviously the aim is to start from the analysis already carried out by the Banca d’Italia, by SVIMEZ and other Establishments, to come up with prompts for the Government’s actions. Without forgetting that Institutions can do a lot by simply outlining priorities, describing accelerated processes, condensing competences to obtain the mentioned objectives. A lot can be done to sustain the action of private operators, even without drawing from public resources and without extraordinary measures.The idea of summoning the States-Generals of the Mezzogiorno, pre-announced by the Italian Minister of the Economic Development, seems to be encouragement-worthy. Not only does this assembly belong to the tradition of Italy, but also the spirit and objective behind it can be agreed upon. National and local institutions, Universities, companies and syndicates must be able to express their own points of view in a sort of public and transparent consultation or, if preferred, in a service conference opened to an audience, a “début public” with prefixed timing. Then, each member will decide upon its resolutions concerning their margin of competence. Not a form of necessary paralyzing consultation with veto rights, but a communal discussion useful to bring together institutions, especially the local ones or the ones with delimited local competence, in order to ensure the coordination of guidelines and of actions on the territories.

Starting from now suggestions to be evaluated by this consultation can be brought up. Among the economic initiatives the ones to be endorsed should be concerning global value chains, especially food and service related ones, being the fields in which Southern Italy has shown the most positivity, and the infrastructures, especially concerning Public Transport services and networking. The South does not need great endeavors, or at least this is not a priority, but what it needs is a strong maintenance of its territory, of the existing infrastructures and of its environment, with actions that would bring the positive effects of an immediate come-back, in economic terms of effects of expenses and immediate usability in favor of economic and tourist activities. One could aim at, for these reasons and taking example from other European Countries, the Special Economic Zones (SEZ) that, as explained by the SVIMEZ report, are areas “characterized by a port… and in which specific regimes of custom treatment, tax exemptions, administration aids and business services are effective, with the main objective of luring foreign investors”. And in these SEZs the guidelines of the EU’s fiscal compensation should be followed. In the Mezzogiorno the SEZs could be established in the transshipment port areas of Gioia Tauro, Taranto and Catania. Keeping in mind that the great lines that transport gas and are essential for the production of energy have different access points in Italy’s Mezzogiorno, and from here they radiate to the rest of the Continent: four pipelines start from the southern bank of the Mediterranean Sea and travel towards Europe, two of them reaching the Mezzogiorno. The Transmed that starts from Algeria, crosses Tunisia and reaches Mazara del Vallo, the Greenstream, that from Libia reaches Gela, and more are being designed: the Galsi from Algeria to Sardinia and then Piombino, the TAP (Trans-Adriatic Pipeline) that will cross Greece, Albania and connect to Italy’s lines in Salento, the Interconnector that will link Italy and Greece (at the port of Otranto).

To finance these investments the EU Structural Funds 2014-2020 must be used at their best- and here too we must have a joint cooperation. In fact there are administrations and Regions that have a greater knowledge on how to obtain said funding. The transferring of these best practices would be an added value, that one could reach either by sending experts from a dexterous region to a less able one, or by sending employees from less expert areas to the best ones for training. The State-Regions conference might give an impulse to this process.Other indispensable resources of the Mezzogiorno are its culture and landscape. Not only the striking panoramic beauty or the single historical monument mesmerize the visitor, but the actual evocative nature of such beauties. Whether we talk about the Riace bronzes or the Valley of the Temples in Agrigento, the Greek Theatre in Siracusa, Paestum, Pompei or Herculaneum, of the countryside in Salento, Burri’s Cretto or the stones of Matera, what strikes the traveller is the myth, the legend behind each place, symbol, rock, stone, shrub, stack. Here, more than any other place in Italy, nature and things are alive and tell stories and traditions. The enhancement of the artistic, historical and archaeological heritage – that is Mezzogiorno’s real petroleum- needs a series of abilities that luckily are already present, but also a more effective communication system and the definition of quality routes that will express these values. The modern tools to access information and the possibility of sharing knowledge and experiences online must be used at their best, in order to create the necessary development synergy and the easiest access possible: a Southern Portal, around which one can urge the creation, by University students and younger ones, of apps to furtherer help users. Superintendents, Universities and operators can cooperate for this goal.

Last, but not least, formation. Universities must find better forms of integration and coordination of courses in order to avoid duplications. It is also necessary to point out excelling centers and favor them. Post-University vocational training courses to support the creation of spin-offs in the most promising fields of economy could be established. Courses in which professors, graduates and economic operators would all be involved. At the base of all of this is legality. This must be the State’s task to ensure safety to citizens and operators. It is fundamental to create, especially in the South, excellent centers for the formation of young people who can set off towards judiciary careers, the Armed Forces or the Police. Of course these are just suggestions. Others, and better ones, can be found with one belief: that Southern Italy, even with all the recently re-emerged criticality’s, is a great growth opportunity, a laboratory in which one can experiment useful paths for the whole Country. Both energy and will are available, and it is possible to appeal to those in the Mezzogiorno who selflessly believe in and are ready to adhere to a “lever” of intelligence that could help in the relaunch design. It would be yet another gift from the South.